For those who do not follow Shiba show news, last week the US saw a 3rd cream AKC Shiba Champion. This is a rare occurrence, and provides the chance for discussion of color quality in our breed (yes they can be shown in AKC). Following this event was the usual rehashing of the cream color debate and about how the US was the “only” place that faults creams (which is inaccurate, most countries follow FCI/Japanese standard for faulting cream). Additionally, there was a petition created on Change.org asking AKC to “recognize” the cream shiba. This spawned an alarming amount of misinformation among pet owners and current breeders about showing, registrations, and genetics.I primarily want to explore some genetics information here first, before delving in to the cream debate in another post.

Genetics: The old staple reference material for explaining coat color inheritance was a series of very nice diagrams written for and included in The Total Shiba. I really really appreciate all the work that went into this amazing breed book, and it is hands down the best Shiba reference material ever written in English IMO. Here are the old coat color diagrams that have become a guide for many:

In Shibas, the A series (Agouti) codes for distribution of black pigment known as eumelanin, on red, sesame, black and tan dogs, with varying intensities of red pigment (phaeomelanin). Agouti is one of the oldest color genes (such as found in wolves, and is associated with very “ancient” breeds of dog like the Shiba).

Ay is sable (which can be red with or without black tipping), and is dominant over at (tan points gene in black and tans). A dog with an Ay inherited from both parents is AyAy and is expressed as clear red, Ayat is expressed as “sesame” and atat is expressed as black and tan, which is recessive to Ay. So a red dog AyAy bred to any other color will give you red AyAy and sable Ayat, but not black and tan, UNLESS the dogs genotype is actually Ayat but appears red (phenotype) due to lack of expression of eumelanin. This seems to be very confusing for people, myself included I admit, and breeders and pet owners often seem to wonder “is my dog red, sesame, or red sesame if nothing else? And what about those red headed black and tans?”

To make it more confusing, Shibas also have a second type of sesame that produces banded hairs (aw) aka wolf-grey/agouti. This gene is slightly dominant over at, and less dominant than Ay for expression, which explains a lot of the incorrect “sesames” observed.  Red and sable dogs do have banded hairs (all Shibas should have banding) but not all have this wolf-grey effect over their entire bodies (think Shikoku). This gene is responsible for wolf grey color, and may be what people who say “true sesame” are thinking of.  aw is very very very rare in Shibas, and it is also recessive.

Most of what you see will be sable dogs with red undertones and some scattered black tips over their back and tail (sashige). For registration purposes, these dogs are often called “Red Sesame”. The big problem as I see it is trying to breed true sesame from pairings of reds and black and tans, hoping to produce aw agouti, but we get dirty reds instead. Well, if the genes aren’t there to begin with, they can’t be passed on. 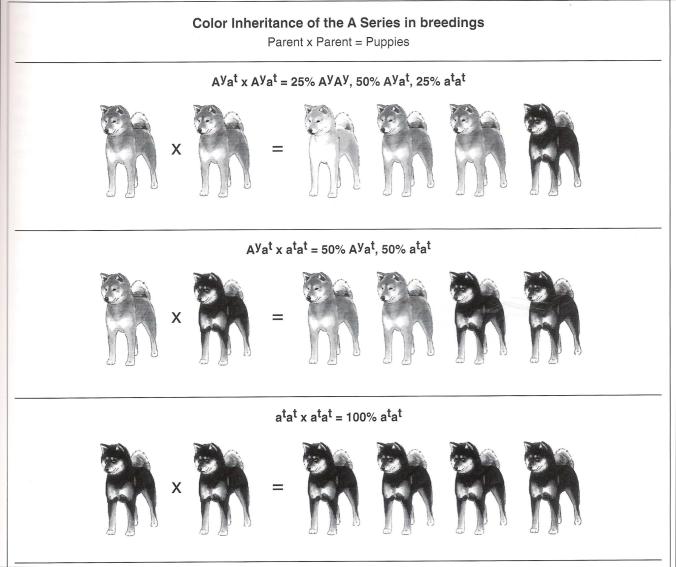 Here is a great updated explanation with very good links from the NSCA web site:

The other important gene series determining coat color is the E series. This determines the dogs’ ability to express its other coat color genes normally.  The A locus expression is directly affected by the E locus, in that the A locus is not expressed in ee dogs. So, a dog that is dominant EE has normal extension and expresses whatever color pattern it has in the A series, as does a dog who is Ee. An ee dog is a recessive red dog and can have any of the genotypes AyAy, Ayat, awaw, awat, atat, but will never express black hair.

All cream dogs are ee, but some red appearing dogs are also ee. An ee dog does not express Agouti series color normally, as the gene(s) for cream don’t compete for expression in the same way as red, sable/wolf grey, and black and tan, and prevents the dog from producing eumelanin (black hair). So, recessive ee dogs never have black pigment in their coats, but can range in hues from light red to yellow to cream. Shiba puppies with no black or grizzling whatsoever in the coat, if not already obviously cream, would be ee and could produce cream or very diluted reds, if bred to other ee or Ee dogs.

A potential problem results from intentionally selecting ee dogs over time in breeding, which could cause the gradual loss of diversity of sable, agouti and black and tan, as well as coat quality, as ee prevents expression of eumelanin, and this pigment does affect coat texture (more pigment=coarser thicker guard hairs). Although it is recessive, the risk is the increasing number of heterozygous Ee animals who won’t express dilute red, but will pass it on unknowingly unless genetic testing is performed. This could result from popular sire/dam effect very easily, and we can see this has already happened in the past with Kishu and Hokkaido, who are now almost entirely ee.

Current theory is that there is a new locus that controls intensity of phaeomelanin red dilution in Shibas, the I locus, which results in cream coloration in ee dogs.  It affects all phaeomelanin (red) in the coat and handily explains why we see very washed out reds, black and tans with no tan points, and cream color inheritance. Another reason to be wary of selection of ee.

Lack of pigment like this would obviously be an issue long term in breeding as it will over time affect coat quality and color and ultimately health (as with any extreme selection). Hokkaido tend to have very nice coats, but they still retain very nice specimens of red, black and tan, brindle and sesame dogs that are bred from and shown (not so much with Kishu). Both breeds are still fairly inbred and the colors are diminishing in quality, as the majority of their populations are now white. This is one reason why the Hokkaido Association of North America has launched the HANA Project, and aims to integrate nicely pigmented unrelated dogs from hunting kennels for greater diversity: https://masakadoshiba.wordpress.com/2011/11/27/another-perspective-on-cream-and-white-in-nihon-ken/

So, cream/white dogs are likely caused by extreme pigment dilution resulting from a combination of at least 2 processes. The Total Shiba uses the C locus (Chinchilla) to explain cream in Shibas and many breeders do still explain cream color inheritance this way, but this is no longer believed to be accurate. TO REITERATE, THESE DIAGRAMS FOR CREAM COLOR ARE NO LONGER BELIEVED TO BE ACCURATE. Here is the cream color chart (below). We know some new things about coat color now, and some things are still not understood, but here it is anyways: 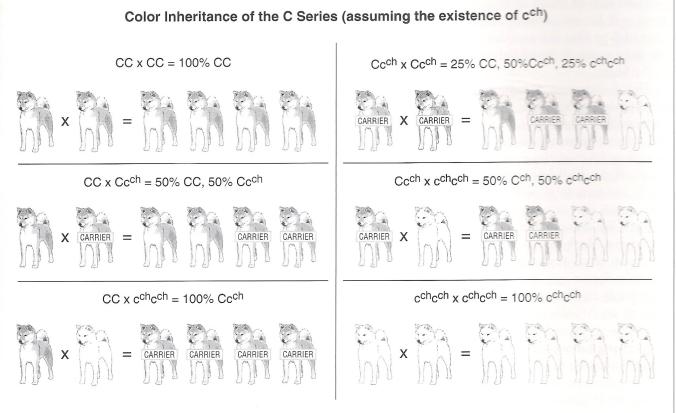 It seems to be popularly accepted in the UK that white and cream Shibas are two different animals, where a white Shiba is distinguished from a cream Shiba based on having red points vs pure white, black vs Dudley nose, and black vs white whiskers. What one person calls cream (with the red hues), another calls white and this becomes confusing. I have never seen a cream Shiba with anything but a pink nose and red points. I am told that in a few examples of white Kishu, Hokkaido and Akita, there is little or no trace of red hue on the coat as is typically seen on cream Shibas, and their whiskers and noses are dark. Overall my impression is that dogs of these breeds with dark noses and no red tint is rare.

So, the following logical fallacies get old after awhile, especially when circulated repeatedly in print:

Wrong. Based on what I have shared at the top of this post, the way a cream may enhance other coat colors in offspring, is if it is genetically already a correctly colored, textured and marked red, sesame or Black and Tan, whose genes are prepotent for good coat quality. The offspring have nice coats NOT because mom was a cream, but because mom’s parents and grandparents and so on had some nice genetics for it.

“You will reduce genetic diversity if you ‘exclude’ creams”

Partially correct: You will reduce genetic diversity if you inbreed and do not out-cross. If we fail to chose a balanced management approach to breeding dogs that already have a limited amount of diversity to begin with, the long term effect on the population as a whole, is dire. The chances are slim to none at this point that any one cream dog has genes that somehow magically don’t already exist in the population. The best way to examine this is to perform genetic testing for Major Histocompatibility Complexes (MHCs) These are worth preserving regardless of color. Refer to the Kishu and Hokkaido examples. They have pretty crappy diversity because of popular cream sires being overused.

“Mismarks, pinto and spots don’t happen on cream dogs, so that means they can’t produce them. I know because all of the creams I bred never produced mismarks” and “You can see Urajiro on creams”

Also wrong: Naturally, it’s difficult to see white mismarks on a white dog. It doesn’t take a rocket scientist to point out that this is similar to the coat quality example above. Again, the offspring lack mismarks NOT because mom was a cream, but because she didn’t inherit those genes from her parents, and neither does the dog she was bred to. Creams can have pinto and reverse masking and snipes and spots just like reds, but it’s difficult to see, and they can certainly produce them in offspring. The required white markings (Urajiro) are also very difficult to see (if at all).

The inheritance of Urajiro deserves some special explanations, which you can read here if interested: http://www.doggenetics.co.uk/albino.html

A good explanation of the importance of Urajiro is found here: http://www.shibas.org/newstand/urajiro.html

And some very interesting reads on neurological issues in white and piebald animals, specifically shyness and aggression: http://www.grandin.com/references/horse.genetics.html

To conclude, the purpose of this post is not to debate how worthy or deserving I personally believe cream Shibas are. I do want to address showing of cream Shibas in a subsequent post however, now that we (hopefully) understand the genetics a little better.

9 thoughts on “Coat Color Inheritance in Shibas: Cream and Agouti”

Tell me what you think! Cancel reply